Caddyshack is a cult favorite, seemingly gaining popularity with each passing year. July 25th is the 37th anniversary of its release, and here at SOLO, we felt it deserved a SOLObration. Rather than just let Caddyshack be the star, we're shifting our focus to Bill Murray. Because let's face it; what would the movie have been without him? Let's celebrate all of Murray's shenanigans--within his films and his life, by cozying up to watch one of his movies with a corresponding cocktail in hand. We promise the drinks will be just as good as the movies.

...who are we kidding? We can't live up to Bill Murray. But we swear our drinks are good. Don't believe us? You'll have to try one for yourself. 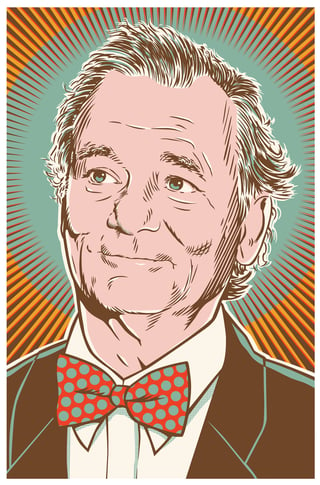 Who could forget the infamous candy bar in the pool scene in Caddyshack? It's one of the most recognized scenes from the movie, and undoubtedly one of the most hilarious--especially when Bill Murray takes a big bite of the "doodie" after draining the pool. While you're watching the movie with your pals at your viewing party, sip on a delicious mudslide cocktail that's reminiscent of the notable scene.

In Lost In Translation, Bill Murray's character Bob Harris is flown to Japan to shoot a whiskey commercial, so of course a drink featuring whiskey is imperative for a successful viewing party. We recommend a Mint Julep: it is whiskey heavy with a twist, which is indicative of Lost In Translation as a whole. The movie is layered and intricate, just like this drink.

In Wes Anderson's Rushmore, main character Max Fischer and Herman Blume (played by Bill Murray) have an eccentric love-hate relationship. In one of the more climactic scenes in the movie, Max looks at Herman and says "I saved Latin. What did you ever do?" In another infamous scene, Max downs a large champagne cocktail. So, it's only fitting to call this drink the Campanie Cocktail, 'campanie' being 'champagne' in Latin.

In the movie The Life Aquatic by quirky director Wes Anderson,the main character Steve Zissou (played by Bill Murray) says that a certain bartender made him "the best rum cannonball [he'd] ever tasted." Fans of the movie were drawn to the drink, and brought it from fiction to reality. Sip this cocktail while watching and you'll be transported into the world of The Life Aquatic.

Did your favorite cocktail match up with your favorite movie on this list? Did you mix and match, or have a movie-marathon? Share your movie SOLObration with us for a chance to win!