4 Games to Play at Your Next Happy Hour Bash

A shindig, a bash, a soirée...whatever you call it, it's a party. Next time you invite your friends and close colleagues to come over  for an after work happy hour with drinks and pizza, spice it up with these three #SOLOCUPGames. You could totally go the BBQ route rather than serving pizza, but then you'd have to be at the grill instead of playing with your friends, and no one likes FOMO. We know that if you bust these games out you'll be the life of the party...er, bash. 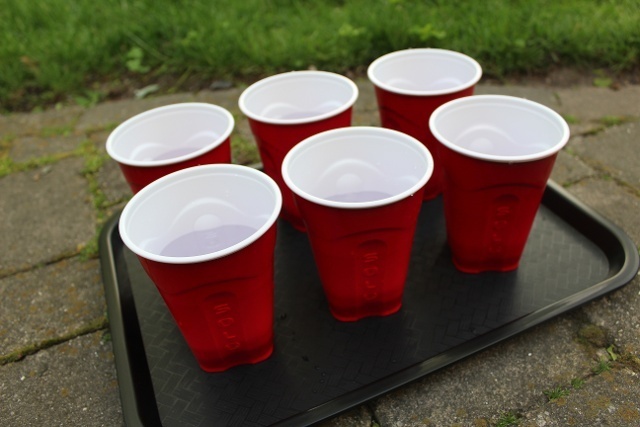 Tipsy Waiter is a variation of dizzy bat that is sure to be a hit, especially on a hot summer day. This game is totally silly and will leave your stomach sore from you laughing as you watch your teammates run while they're dizzy and trying not to spill any of their water. Odds are at least one of you dumps the whole tray over! All you need to play is a bunch of your friends, two trays, two bats, a pack of Solo® Squared cups, two buckets, and water.

PONG is a sport we take pretty seriously at Solo®. Pong is made for champions and epic moments from legendary compadres! It has been our experience that Beer Pong is not the sport of champions, although it certainly generates #epicfail moments. How about we all agree that Americans do NOT need encouragement to binge drink, and that we can *drink* our beer without slamming or chugging it? It’s called #Adulting people. Get with the program.

Grab those empty pizza boxes, and set-up your #SOLOPizzaPong!

The #CupBlowingChallenge seems simple, but it has the word 'challenge' in its name for a reason! Let us know if you were more successful than we were.

There are some games that'll never go out of style: Monopoly, Guess Who, Clue, Candy Land. Most of the time, these games are associated fondly with Sunday game night with the family or rainy day board game marathons. This summer, we propose you make a board game come to life by bringing it to the sunny outdoors, Solo style. "Solo Ship" is an unexpected, life-size game that is sure to bring some childhood nostalgia at your next barbeque or backyard get-together. Best of all, this game has a sweet twist. Let's SOLObrate in style!

The objective of SoloShip is to sink your opponent's ships before they sink yours. This is done by calling out the coordinates of one of the squares on their board, such as "J9." Because neither of the players can see one another's boards, they must guess where their opponent's ships are stationed. When they guess a space on your board correctly, you respond that you've been hit. When they guess incorrectly, you respond that they've missed. Once they have successfully hit your entire ship, you respond that they've hit your target and sunk it. After each turn, mark your guess on your score sheet to ensure you do not guess the same coordinate twice.

To begin playing, each player places their 5 ships (with optional treat cups) on their board. The ships may not be placed diagonally and have to be placed either horizontally or vertically. No ships may hang off the edge of the board, overlap one another, or be placed on top of another ship. Once the game begins, you can't move the ships from their original placement. Whoever successfully sinks all of their opponents ships first wins!

Were these games a total hit at your latest party? Do you want to win a SOLObration Sampler? Share your #SOLOCUPgames SOLObration for the chance to WIN!