Whether you're having company over for an Saturday night backyard get-together, hosting a 4th of July picnic, or your kids simply need something to do mid-afternoon, these backyard games will be an absolute hit. After all, SOLO believes that everyday is worth celebrating, whether you're celebrating a holiday or the simple fact that it's Monday. To make your next SOLObration (whatever the occasion!) a blast, we've compiled a list of games perfect for the entire family. In fact, we're sure your kids will go absolutely crazy for them.

This summer, we've deemed the month of June the month of #SOLOCUPGames. Pick up all the Solo® products you need at Walmart to play these games at your next SOLObration! 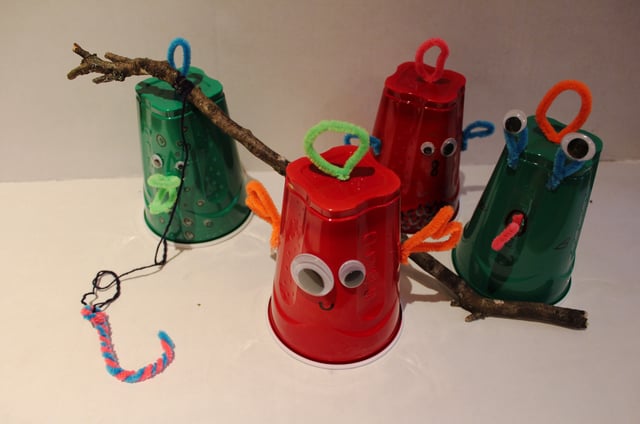 Many of us have dug for worms, sat out on a pier, and waited for the fish to bite. But for some of us the closest we've come is playing that magnetic fishing game where we held a small plastic pole and hoped the magnet on the end of it stuck to a magnet on one of the plastic fish's mouths "swimming" around in front of us. Sound familiar? I guarantee you thought that game was a blast when you were young, and I guarantee that your kids will think it's a blast, too. If you're on a time crunch or simply don't want to purchase this game we have a super easy DIY version for you to create out of Solo® cups, and it's called Gone Fishing!

It seems like there's a million and one ways to use a pool noodle and only a handful of them actually involve a pool. They're just so handy! While this game isn't a pool noodle hack, it is a hack to keep your kids occupied and a way to cool down this summer. Wet Noodle Race can be played in teams that compete against one another, or just with two solo competitors, and all you need to begin playing is two buckets, two pool noodles, masking tape, and Solo®’s Clear Plastic Cups.

Here's how to play: On the top of each pool noodle, securely tape a Solo® Clear Plastic Cup so that it is standing upright on top of the noodle. Have players (or teams) stand on one side of the lawn, and on the other have a bucket for each player/team. Fill the cups with water, and then have the players hold the bottom end of the noodle, balancing the end with the cup of water in the air, as they try to make their way to the bucket at the end of the yard. Whoever fills their bucket up with water first (or has the most water in their bucket at the end of the game, if you want the game to be shorter) wins!

Is there any place as magical as a mini golf course? With all of their surprises, challenges, and quirky obstacles, mini golf is a summer activity that brings joy and laughs to the whole family. Whether you're the best putter in the world or go over the stroke limit every hole, there's crazy fun to be have at every level. Some of us aren't lucky enough to have a mini golf course nearby, but no fear! Solo is here to help you build a wacky Backyard Mini Golf course that's on par with any professional one, guaranteed.

How to Create Your Own Mini Golf Course: You most likely won't have the room to create a full 18 hole course in your backyard, so aim to build 3-5 holes. On relatively flat ground, dig a hole deep enough to place your Solo® Squared® Plastic Cup. Alternatively, turn the cup on its side and dig just deeply enough so the cup will stay in place. Cut pool noodles in half and place them around the terrain you're building, forming a rectangle with one side open, which is where you will putt from. Inside the border you've created, place obstacles such as a wall of water from a sprinkler, a garden gnome you have to find your way around, or a pit of sand you have to avoid. Have fun crafting each hole, and then get playing!

Tic Tac Solo is perfect for younger kids, and it can keep them occupied while you work on grilling up dinner or greeting guests. Best of all, all you need to make this a reality is some sidewalk chalk and Solo® Squared plastic cups of two different colors. Draw a Tic Tac Toe board (or what most kids would call it nowadays, a 'hashtag') on the ground using sidewalk chalk. Rather than designating one player to be 'x's and the other 'o's, give each player a different colored stack of cups. Then, let the games begin!

Picture this: it's mid afternoon in July or August, there's not a cloud in the sky, the sun is beating down, and it's so hot outside that you feel like you're melting. You have two options. You can either stay inside all day watching TV in the air conditioning, or you can make the most of the gorgeous weather and try to beat the heat. Solo is all about taking advantage of every single day, and on the next day that it's so hot it feels paralyzing, we invite you to try to cool down by playing Solo Squirt Gun Race before retreating to the AC!

The goal of the Solo Squirt Gun Race is to use your squirt gun to propel your Solo® cup from one end the string to the other before your opponent(s). All you'll need to play is Solo® Squared plastic cups, squirt guns, string, straws, tape, and scissors!

Disclaimer: This game will most likely end in a squirt gun fight. Make sure you don't have anything on you that can't get wet!